We slept until 10 at the house. After all, it was the first day of vacation! Morning Coffee Time was relaxed, but too short. I wanted another cup but Mia and I didn't want to wait for another pot to brew (and Fender T. Dog doesn't drink coffee).

The pace of the day kicked up in a hurry. We packed for the trip, closed up the house, and drove to the marina.

Mia loaded No Losses with enough supplies for an army while I did the pre-flight checks and warmed the engines.

Neither of us realized that we had forgotten to bring two very important items ...

The first leg of our journey lasted all of five minutes as we pulled around to the gas dock at the marina to top off the tanks. 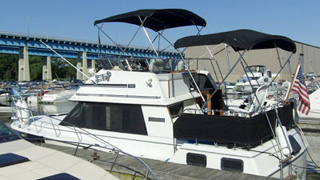 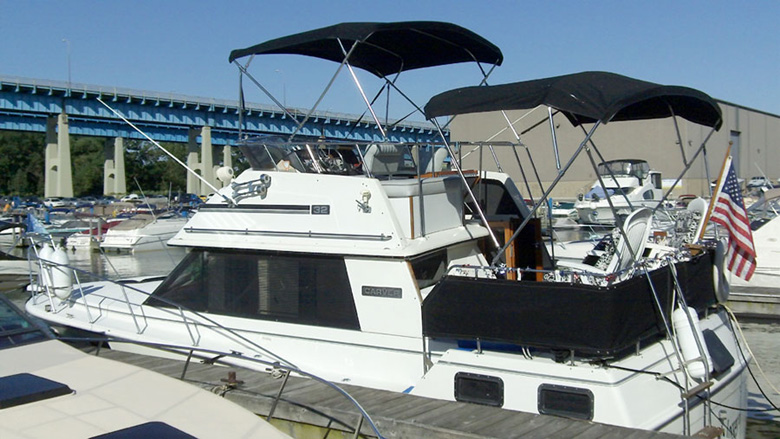 No Losses in her slip at the marina.

The Western Terminus of the canal is technically 16 miles south in Buffalo, but the protected section of the waterway terminates here in the Tonawandas. The junction's sentinel is this wonderful piece of history: The second-oldest man-operated swing bridge in the world, built around in 1892. (The oldest is just around the corner in the Little River.)

"Tonawanda's Gateway", as it's called, is the divider between Erie and Niagara counties and the cities of Tonawanda and North Tonawanda.

Docking at the Gateway walls means you are within walking distance of Crazy Jake's party bar, Dwyers Irish Pub, The Dockside Bar and Grill, Double D's Drinking and Dining, and several other party spots.

This is the beautiful North Tonawanda side. Depth at the wall is a consistent 7 feet or more. They spent a lot of money to improve the wall and docks.

They sell beer at the outdoor concerts on Wednesday, Friday, and Saturday evenings, which makes this area a hugely popular destination for locals. Live music at the Dockside goes until 2am on weekends, and Crazy Jake's, Dwyers, and Double D's also have live music. No wonder they call it "Tie-One-Onda"!

It costs $20 a night for boats over 30 feet including power and water.

The Tonawanda (south) wall will cost the same, but has much better facilities including laundry, showers, and pumpout. The two walls are in different counties, so there are two harbormasters and the money goes to two different places. There is no reciprosity agreement. If you pay on the south side and move to the north, you have to pay again.

Closer to the city (west of the main wall), this section of wall is at the mouth of Ellicott Creek. Water depth is slightly shallower than other sections, but generally you can count on four feet.

These are considered to be prime local spots and are usually among the first to be taken. They are closer by several hundred yards to the supermarket, drug store, fast-food dispensers, bank, liquor store, and beer store. 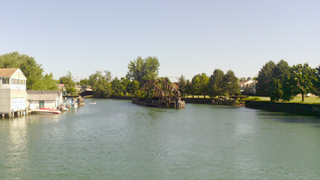 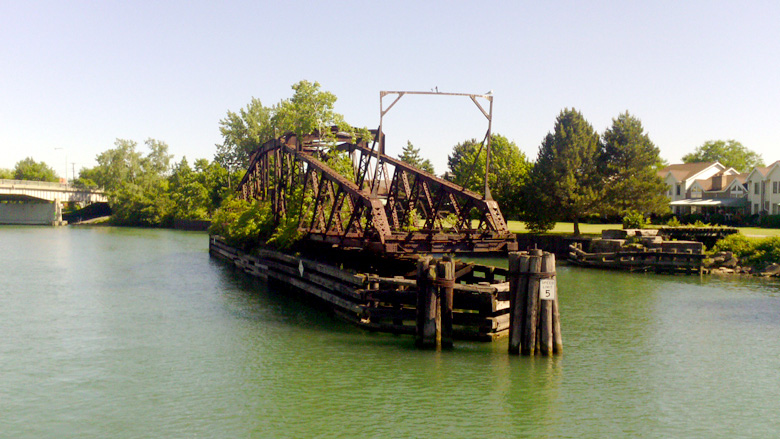 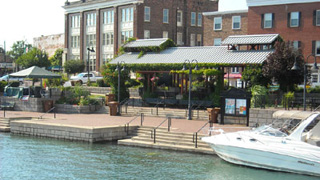 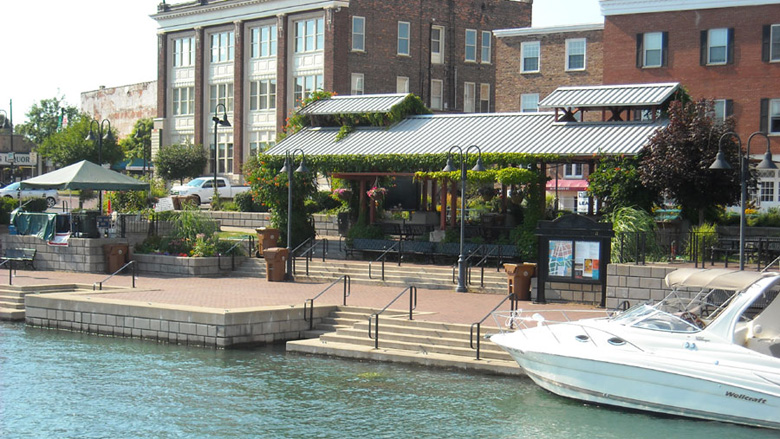 The pavilion in North Tonawanda. 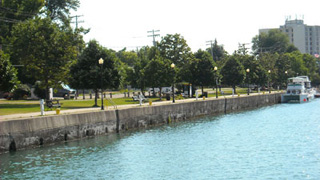 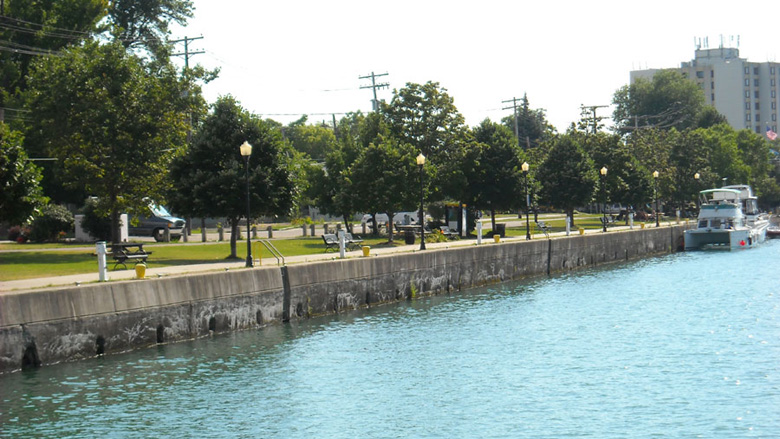 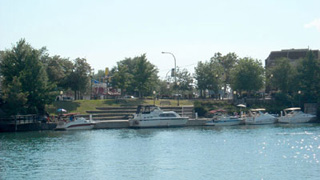 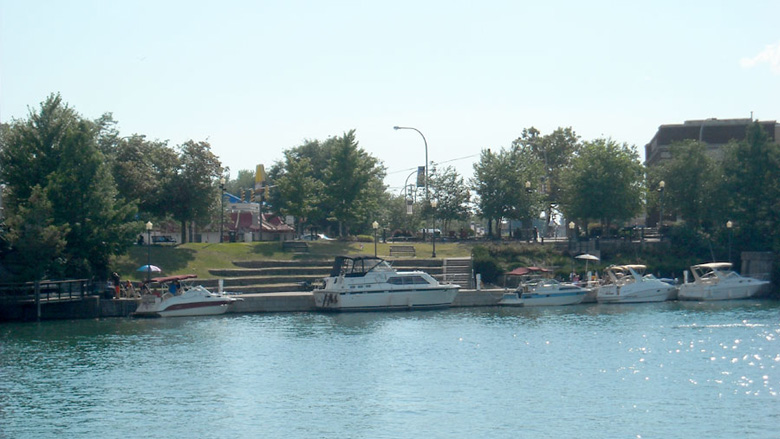 The mouth of Ellicott Creek.

I've added "Total Hours", "Average Speed" and GPS info with Google Maps to the left column. Since most people will begin or end their trips at Tonwanda I thought it would be nice to have a timeline and location info.

From 3:15 until 4:00 we were rafted off my brother Scott's 34-foot SeaRay. We were torn between staying for the final night of Canal Fest (a 10-day annual celebration of the Tonawandas' canal heritage), and getting a head start on our trip. After all, we had only 8 days.

This is the first year we didn't bring No Losses to Tonawanda for Canal Fest. We usually have her at the wall for the huge closing night party, where all of our friends gather for a once-a-year all-nighter. Scott informed us that the main party was the night before. We missed it! We decided to move on.

The video shows the entire area at 2x normal speed, which would be 8 mph instead of a dead idle at 4 mph.

Western Terminus of the Erie Canal

Heading west. The only sections of wall without power and water are on the north side between the Dockside Restaurant (large gray building) and the bridge. 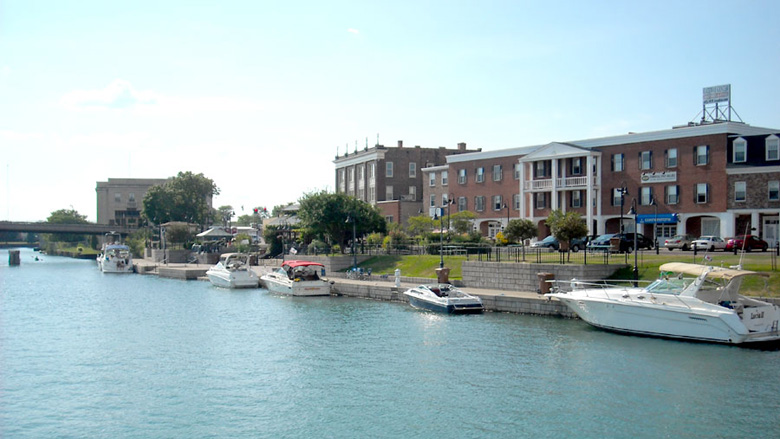 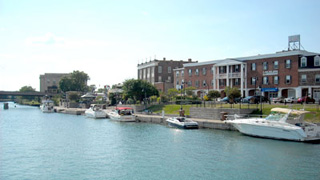 The ramp marks the beginning of the end of the Erie Canal. Headed westbound, you'll see more and more private docks, boathouses and parks lining the banks.

Heading east, this section of the canal makes use of the natural waterway called Tonawanda Creek.

Heading west. Depth at the docks is very shallow. A 22-footer has a hard time putting in at this small launch. 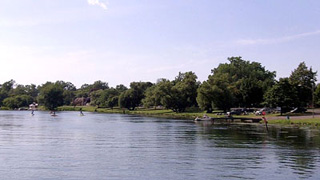 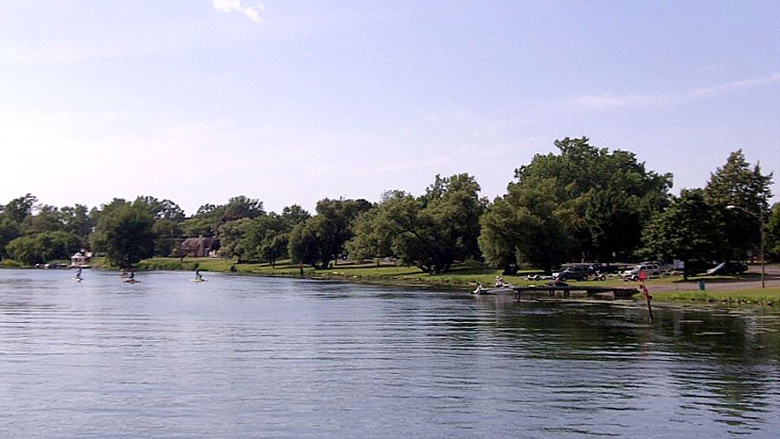 Another North Tonawanda city boat launch. This one is on the grounds of the Botanical Gardens just north of the Robinson Street bridge.

The wall looks inviting to those who may want to stop and walk through the gardens, but check the water depth!

This section of the canal has us moving north instead of east, which is the general direction until we get to Lockport. 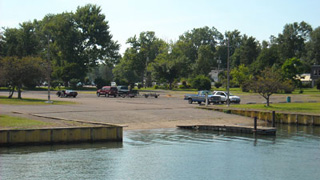 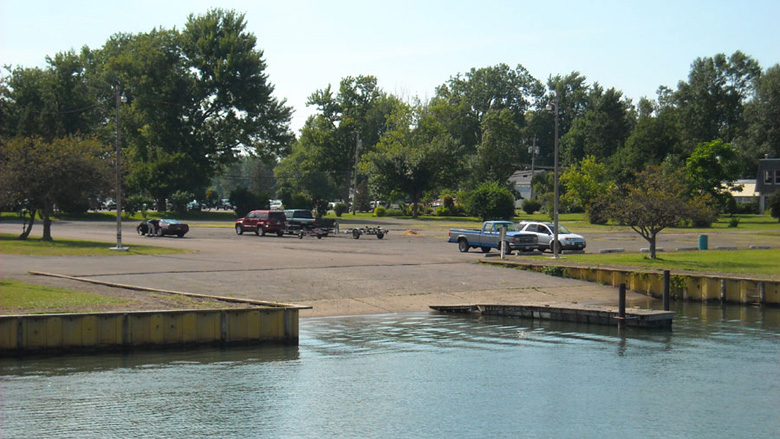 The Botanical Gardens can be seen in the background.

The West Canal Marina isn't a marina. It's a free boat launch and a nice little park.

Again, water depth is questionable, so check the sounder! With No Losses' three-foot draft I wouldn't chance stopping there for a doggie walk.

It's a good thing Fender T. Dog has a huge bladder! 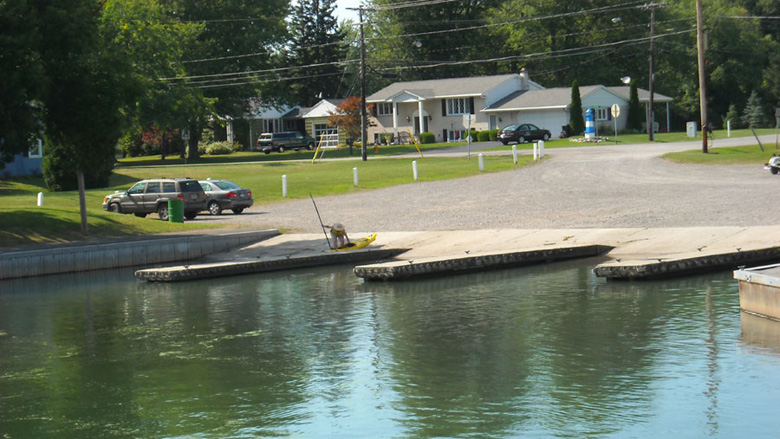 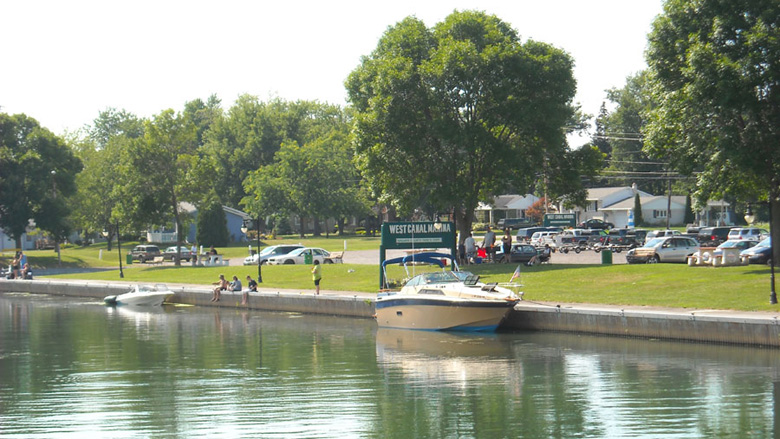 The wall at West Canal Marina.

Fifteen minutes past West Canal Marina and it's starting to feel like we're leaving civilization behind.

There are streets and homes close by, but the sounds are quieted by the trees. 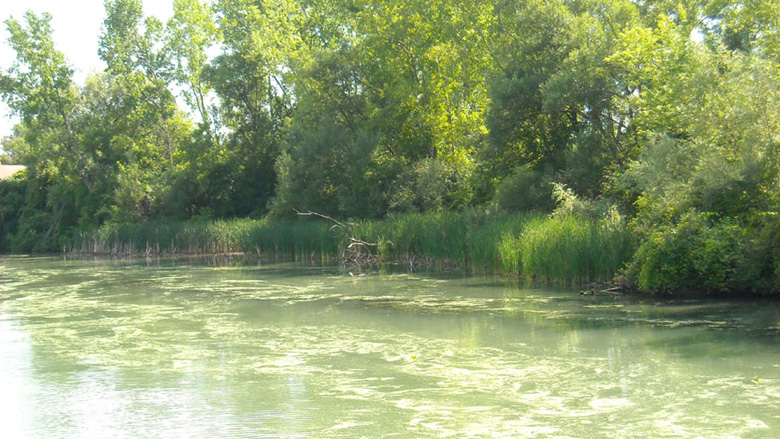 Tonawanda Creek is a natural waterway. 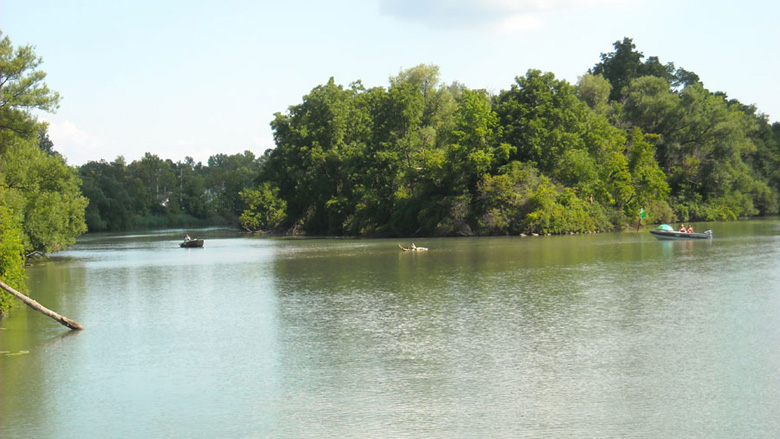 One of the many islands in Tonawanda Creek. Stay in the channel!

Amherst Marine is on Tonawanda Creek Road near Campbell Boulevard.

If you haven't made it a courtesy to slow to idle speed in No Wake zones, now's the time to do it! The boat owners here pooled their money and bought a war surplus 50mm machine gun. The channel is full of bullet-riddled boats whose captains didn't slow down. (Okay, not really. The owners are friends, and they are good people.) 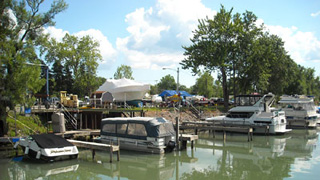 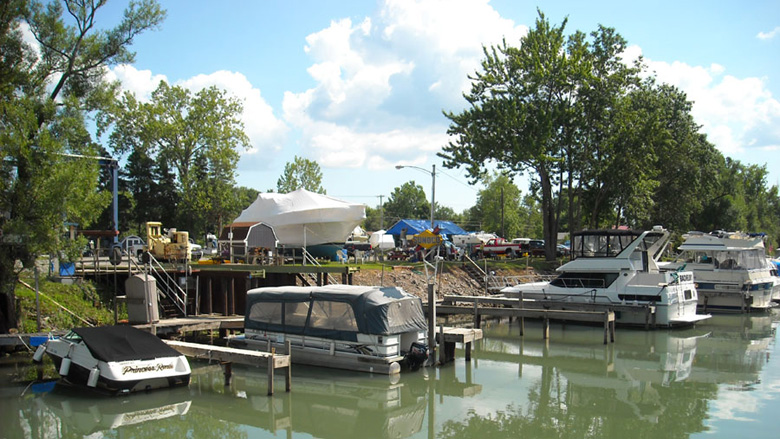 Reality hits us: What did we get ourselves into?!?! Fact is, it is exactly what we wanted to do. This is our first indication that we are indeed embarking on the Great American Escape Fantasy.

The man-made section of the canal begins just after Tonawanda Creek splits off to the west. The creek is not navigable except for outboards and outdrives that can get to the docks at the Ship & Shore Restaurant. (A great place to eat!)

This section marks the beginning of the "Deep Cut" which was blasted out of bedrock. The solid rock walls get higher and higher as we move through the Niagara Escarpment.

The first of many Guard Gates

Guard gates close during the winter so they can drain the canal to prevent damage to structures, locks, and harbors. It may seem like our 14.5 foot airdraft won't clear under, but the clearance is just over 15 feet. 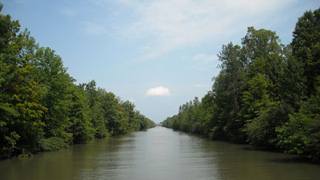 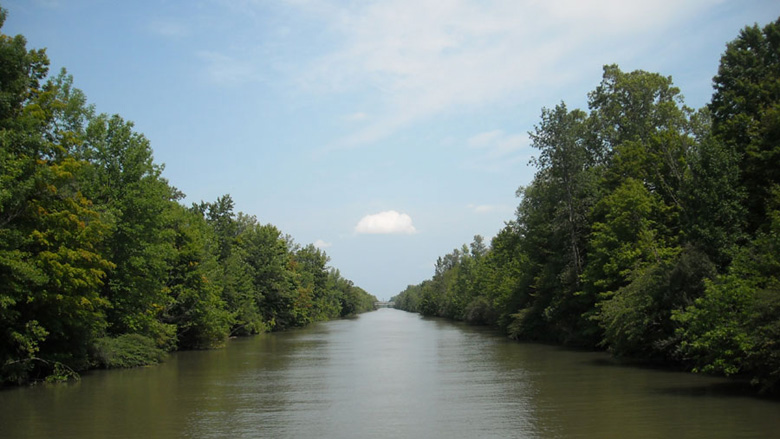 The beginning of the Deep Cut.

This unimproved wall is on the north side just west of the Lockport Locks.

It may look like a good place to stop for a doggie walk or a break for lunch, but keep going!

We tied off to starboard in 2010 and cupped a prop even though the depth sounder showed 7 feet. Who knows what's been dumped there over the years?

It's also in the industrial section of town and there is nothing within walking distance. 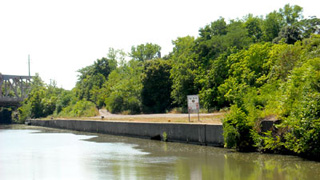 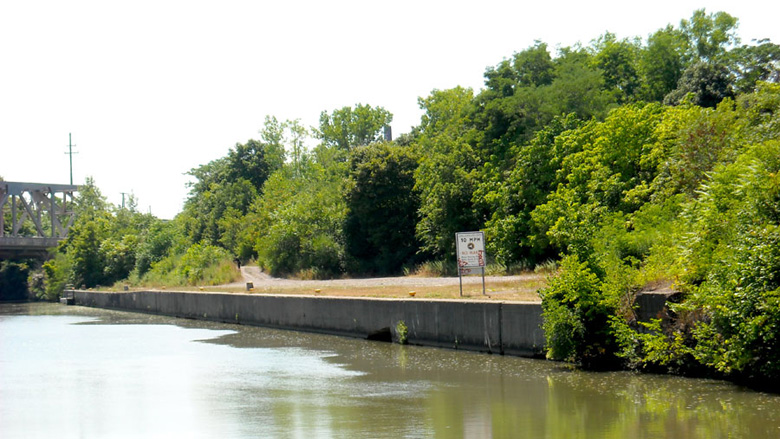 1st Mate Mia manned ... er, "womanned" the boathook on the bow to hold us near the lock wall. Cappy Rick manned the aft hook. It can get turbulent inside the locks when they're filling, but the trip down is nice & easy.

Unfortunately we didn't get any pics or video of the approach from the west. As I said, life got very busy! We spent about half an hour in the back-to-back locks.

Video: Approaching Lock 34 from the east.

Twin locks 34 and 35 have a total lift of 60+ feet. Lock and bridge operators on the canal monitor marine VHF radio Channel 13. They are some of the nicest people on the planet! 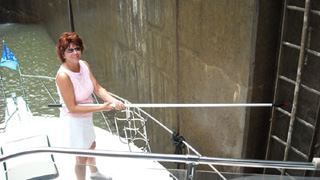 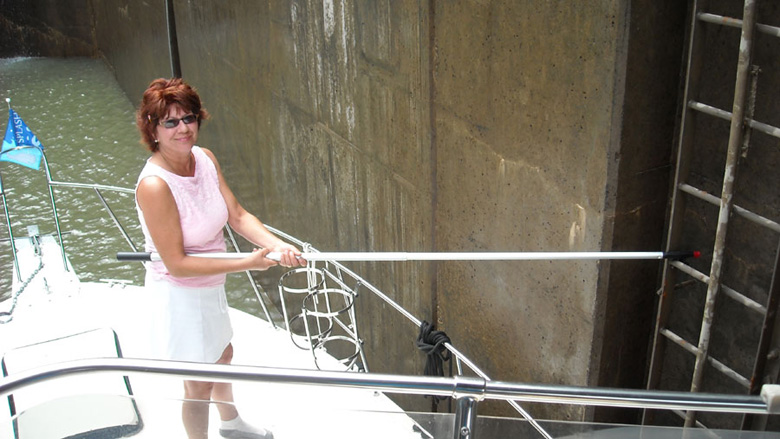 Inside Lock 35. Boat hooks are used to hold the boat close to the lock walls.